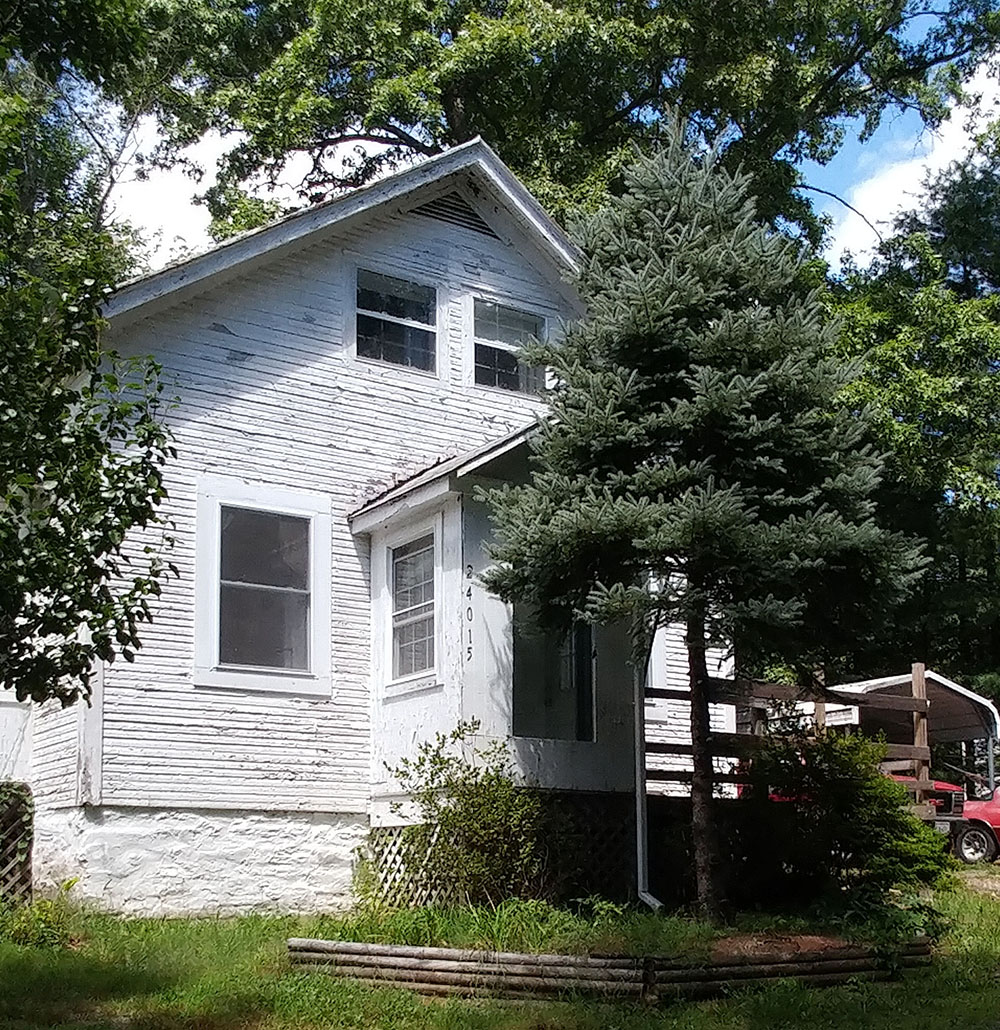 Number of rooms: One originally, which was then partitioned into two rooms in 1954. In other words, the space was not increased.

Construction Material. Wood frame, front-gable schoolhouse. Seating capacity in 1920 was 52, though there were only 26 single and double desks.

Blackboard:  2 wood and felt boards.Plumbing: None. Water was well water, carried by male students from another property.

Electricity: None during segregation mentioned in records. The current structure is electrified.

Heated by wood/coal stove. Each morning, a child was required to bring a lump of coal for the stove.

Ventilation was by “lowering the window.”

The only known historical photo is an insurance from 1940 (above). The project has also done a number of contemporary photos, as well as a video on transportation. Contact us if you any photos to share!

1909.   The former Bull Run School, now a residence, was … erected in 1909 as a replacement for the 1890 building as a typical one-room frame, front-gable schoolhouse.    The land was donated by Albert Hall, grandfather to Betsy Stewart (Robinson), who now lives next door.   The structure  named Bull Run School after its location on the east slope of Bull Run Mountain.   Source: History Matters Staff. (2004). Loudoun County African-American Historical Architectural Resources Survey. Leesburg: Balch Library and Loudoun County Board of Supervisors. pp 38/39.  Interview of Betsy Stewart by Larry Roeder 8/19/2017.

1920/21:  That year the school had 4 trustees and 4 special supervisors.  Also had a community league with 12 members and library with 16 volumes.  8 students were involved with the County School Fair.

1940/41.   Some of the teacher’s cash was set aside for a wedding in May and in November for the Building Fund.  The Building Fund might have been for school maintenance; but across the Black community, funds were also being raised to pay for furniture to be put into the new Douglass HS building.

1941/42.   The teacher’s cash fund paid for social events, like an easter play, but also for Dental work and for curtains and for a fair that year.  What is also interesting is that standard test results were left blank, at the request of the Superintendent.  The treasurer was one of the students, named Claudia Whitney, age 12.

1943/44.  The teacher’s cash fund paid for entertainment, as well $21 for paint, as well as “oil, soap and powders,” and 2 gallons of oil.  Oils were often used to keep dust down on school floors; but perhaps the 2 gallons were to be used for heat. This something to be explored.

1950/51.  The teacher’s fund paid for a trip to the zoo in Washington, DC, oil cloth for the school, a county dance, curtains and Christmas decorations.  The school also raised $50 in support of a popularity contest.

1959:  The 1909 schoolhouse closed down in AY 1958 and was sold at public auction Saturday, April 4 1959 at noon on the steps of the Court  House of Loudoun County.  Deed recorded in Deed Book 7F, Folio 358. Archives, Loudoun County Circuit Court Archives.  Source:   Poster for Public Auction, School Box 2, Archives, Loudoun County Circuit Court Archives.  Although History Matters (see above called the school a one room frame schoolhouse, the Poster from 1959 described the structure as a two-room frame schoolhouse,” this because it was partitioned in June 1954, per agreement by the School Board.  See School Board Agenda (annotated), June 14, 1954. Source: EWP: 2.2 Yr. 1954 6-14 Bull Run Partition.

When Betsy went to school, the area was entirely Black; but today is of mixed race.

According to Betsy Stewart (interview by Larry Roeder 8/19/2017) Everyone walked to school, other than the instructor, who came by private vehicle.  Most walked home for lunch or brought lunch in a bag.  Tins were not used for lunch.

The Black community recognized that they had rights under the U.S. Constitution to petition for improvements. For details on how petitions were used in general, go to the Petitions Page.

An undated petition signed by 28 patrons to the School board appealed for an extra room for Bull Run, due to overcrowded conditions.  Bull Run Request for a Room.  Location:  EWP: 2.5A Colored Petitions.

Jan 24 (unknown year) Another undated petition also asked for an extra room.  In this case, the table of signatures also showed how children would be provided by each family.  The parents offered to help pay for the new construction. Bull Run Unknown Year.  Instead of an extra room, a partition was provided in 1954. Location:  EWP: 2.5A Colored

The project is developing a database of biographies of historical instructors. Once that is done, please refer to that linked page for deep background on each.  The following is a simple identification of instructors who worked at Bull Run from the earliest date for which we have records, 1917/18.  Gaps exist, which will be filled in once the data emerges.